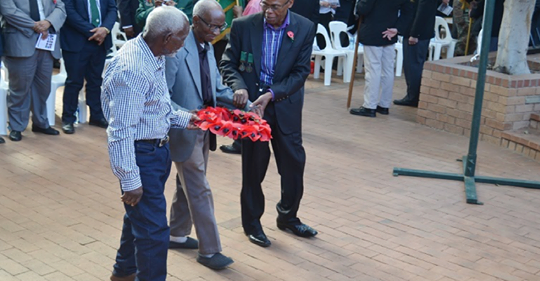 In this article, LSE PhD student Rishika Yadav elaborates on her experience at a memorial service for the Cape Corps, which she attended while on a trip to South Africa, and contemplates on the space of non-White soldiers in First and Second World War remembrance ceremonies.

As Remembrance Sunday has drawn to a close, I reflect on my own experience of commemoration in South Africa where I spent two months for PhD fieldwork. While trudging through archives, I was lucky to meet several military men, men of colour, who were serving or had served in the South African Defence Forces. Intrigued by my research, they invited me into their circle to discuss their experiences and recount stories, allowing me valuable insight into how they viewed their history as servicemen of colour in a state that was supressing their identity only twenty-five years ago.

My project focuses on the Coloured (‘mixed-race’), Indian, and Malay soldiers from South Africa who participated in the Second World War. Histories of the World Wars in South Africa seem to be little more than an apparition. Although South Africa supplied a wealth of her resources and men to the imperial cause, the country’s participation has received sparse attention from western scholarship. It is rarely included in umbrella narratives of the wars, although a small but assertive group of South African and British scholars have contributed towards specific gaps in literature. However, a detailed academic public history on South Africa’s role, akin to the countless works on war in Europe, does not exist. Academic preoccupation with interpretations of segregation, rising international condemnation of the apartheid state, marginalisation of the histories of non-White populations – all have contributed to a culture of amnesia.

Nevertheless, an alternate tradition of remembrance emerged from veterans’ organisations that has kept the memory of these soldiers alive. Retired officers and soldiers stepped in, recording their experiences in memoirs, autobiographies and amateur books. Robust ex-servicemen organisations soon came into being. Although they were primarily dedicated to aiding veterans with military bureaucracy, and to provide help to families of soldiers killed-in-action, they also regularly met to organise events, lectures, and memorial services. It was through my chance meetings with Legionnaires in the archives that I was invited to one such event, the annual commemoration of the Battle of Square Hill fought by the Cape Coloured Corps in Palestine in 1918.

The Cape Coloured Corps was first mobilised during the Great War as a combatant unit and was exclusively recruited from South Africa’s Coloured community. Coloured soldiers had a long-standing tradition of military service in the Empire. They were enlisted by the British during the frontier wars, the South African War, and, finally, the Great War. They were later recruited by the Dominion and Apartheid governments in the Second World War and the Border Wars of the 1970s and 1980s. Despite this legacy, their service to the State often went unnoticed in the public space. White governments seldom acknowledged the contributions of non-White populations post-war as, in South Africa, the right to military service was considered synonymous with a man’s right to citizenship. A privilege that non-White communities were conveniently excluded from. Despite this discrimination, an alternate dialogue emerged from military associations that sought to recognise and honour the sacrifices of the men of Cape Corps irrespective of the prevailing political climate.

The Battle of Square Hill (fought in Palestine) was fought as part of General Allenby’s ‘Palestine Push’.  The 1st Battalion of Cape Coloured Corps was charged with attacking a particularly fatal Turkish stronghold. Intelligence on the Turkish defences was insufficient and while the attack commenced in the dead of night, it was anything but a swift victory. The Cape Coloured companies were taking heavy casualties which only increased after sunrise as their positions were exposed while the Turkish units took cover in natural caves. The result was incredible feats of bayonet charges, close bombing with hand grenades, and hand-to-hand combats. All the officers of the Cape Coloured units were incapacitated when the order to retreat was received. Under heavy enemy fire the Non-Commissioned Officers (all of whom were Coloured soldiers) organised a swift an orderly retreat to Square Hill, a feat that was highly praised by all officers who witnessed the withdrawal from neighbouring outposts. Although the Cape Coloured companies were not sent back, the 1/17th (loyal) Indian units that were ordered to charge again found that the Turkish units had taken massive casualties and were retreating.

Kh Jibet, Square Hill and Outpost Hill were all captured. A total of 400 men from the 1st Battalion of Cape Corps had taken part in the battle. When the dust settled, the numbers were 51 killed, 101 wounded and 1 captured. The Turkish prisoners-of-war numbered 349 and a machine field gun was captured. Their remarkable triumph earned the Corps the battle honour of Palestine 1918. In 1934, a memorial was erected in Kimberley (Northern Cape province, South Africa) that proudly displayed the captured Field Gun. It was inaugurated in a ceremony by General Jan Smuts who remarked, ‘The Cape Corps was selected to take one particular section of this apparently impregnable front [Palestine]…they covered themselves in glory.’

In the inter-war period, politics in South Africa grew more divisive with the rise of the pro-Apartheid Nationalist Party. On the eve of the next world war, the sacrifices of the Cape Coloured regiments were conveniently forgotten in favour of appeasement of the White Afrikaner populace that feared arming a black man against a White. The Corps was mobilised, but only as a non-combatant auxiliary force and was merged with the Indian and Malay Corps – now simply called the Cape Corps. They were not even formally part of the Union Defence Forces. Nevertheless, within these constraints, men of the Cape Corps did remarkable work as stretcher-bearers and drivers who sustained supply lines on the frontline, unarmed and under enemy fire. Several of these soldiers received awards for acts of gallantry. In 1948 they were once more praised for their valour by Smuts, now Prime Minister, at a flag ceremony that was dedicated to the Cape Corps where he was the guest of honour. Once more, post-demobilisation, veterans of the Cape Corps were denied comparable (or even decent) benefits that their White counterparts received. In 1948, the Nationalist Party rose to power and Apartheid was swiftly and clinically implemented. Within this system, there was little hope for non-White veterans to seek what was owed to them.

Unusually, despite this injustice, the sacrifices of the men were not forgotten. As I learned in due course through my research, a commemoration ceremony was being held annually in Kimberley since 1931, (three years before the memorial was erected there). The Griqualand West Ex-Servicemen’s Association carried and continued this tradition ‘…in memory of Cape Corps who sacrificed their lives for King and Country during the Great War.’ Each year it was attended by the Mayor, civil servants from the City Council, other guests of importance, and veterans. During the war years, the ceremony also saw larger parades and march-past by units stationed in the area. GWEA was later merged with the British Commonwealth Ex-Servicemen’s League who continued commemorating the Battle through the 1960s-70s despite political upheaval. This is where the records ceased to inform me further. However, alternate sources do suggest that the commemoration service continued to be held, year after year. Smaller annual services were also held in Cape Town.

This year, like previous years, the ceremony was held on the second-last Sunday of September. I was invited to the service at the Museum of Military History in Johannesburg. It was attended by serving officers and representatives of various South African and British Legions as well as members of the City Council. More astonishingly, the ceremony was honoured by the attendance of Mashwe Simon Mhlanga and Tsoamotse Elias Tsoamotse, veterans of the Second World War from Soweto who had served in the Native Military Corps. They laid wreaths on behalf of all soldiers in all wars, not only commemorating the fallen, but also honouring the life they had left behind. Mashwe Mhlanga was celebrating his 100th birthday that weekend, and as he let his comrades know, he was happy and blessed to be alive, to be there with them on that venerated occasion.

It astounded me that in the apartheid state where military service was equated to the right to citizenship, the military achievement of a non-White community was publicly commemorated. However, during the service in Johannesburg, looking around at the soldiers and veterans around me, I realised that this legacy was bigger than the circumambient politics of the day. A detailed academic public history on South Africa’s role in the world wars may not yet exist, but the men around me and those before them have preserved these histories. The role of veterans’ organisations in South Africa has extended beyond the role of associations that aid soldiers and their families. Although not free from prejudice, they have contributed towards conserving legacies of military service, both White and non-White. Commemoration services dedicated to non-White soldiers have ensured that their contributions were not written off from public memory despite five decades of suppression. Although limited in reach and capacity, non-White veterans’ organisations such as the Cape Corps Association (that was active for several decades in Cape Town and Kimberley) served as a haven where ex-soldiers, neglected by their government, could come together and chronicle their stories. Thus, even hundred years on and despite the many obstacles, their sacrifices have not been forgotten.

Rishika Yadav is a PhD student at the Department of International History, LSE. Her research focuses on analysing the experiences of Coloured, Indian and Malay soldiers from South Africa in the Second World War. She has previously worked with UNESCO MGIEP and the Centre of Civil Society, a public policy think-tank based in Delhi.