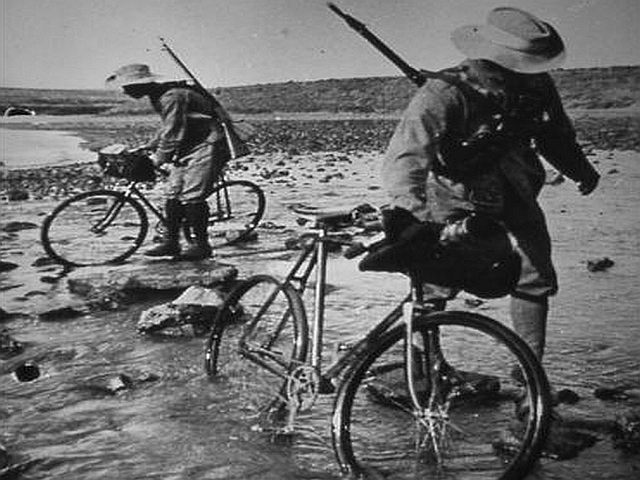 The heroism of the men of the Cape Corps during the Battle of Square Hill more than a century ago in Palestine have been remembered at a memorial service in Johannesburg.

On September 18, 1918, the 1st Battalion Cape Corps attacked and took Square Hill, capturing almost 200 Turkish soldiers and one gun. This was part of Britain’s efforts to defeat the Ottoman forces in Palestine and force Turkey out of the war.  The captured gun now stands at the Kimberley Cenotaph where another memorial was held last weekend.

On 20 September, the Corps was ordered to take another hill to the north.  However, it proved to be strongly defended and they suffered heavy casualties – especially among the officers.  Their withdrawal to Square Hill had to be led by non-commissioned officers.  For their actions at Square Hill members of the battalion earned a Military Cross, a Distinguished Conduct Medal and five Mentions in Despatches.  According to historical records, the quartermaster of the Cape Corps Captain Ivor Difford said this was the greatest day in the history of the Corps.

The Cape Coloured auxiliary units were raised from the community around Cape Town at the start of the First World War to provide non-combat support such as drivers and mechanics for the campaign in German southwest Africa.  However, the government of General Louis Botha took the decision to raise a unit of coloured troops for combat service in German East Africa – today Tanzania and the surrounding countries – ahead of the campaign in Palestine.

This year’s remembrance service, organised by the Speaker of the City of Johannesburg in conjunction with the South African Legion of Military Veterans, was held at the Ditsong National Museum of Military History in Saxonwold.  It was moved from the nearby South African National Anglo-Boer War Memorial due to construction work.

In tribute to the sacrifice of made by fellow South Africans, two World War II veterans from Soweto – who between them account for almost 200 years – laid wreaths to a round of applause from those present.  Arthur Khosa from the Soweto Branch of the SA Legion of Military Veterans said Mashwe Simon Mhlanga celebrated his 100th birthday on Thursday, while Tsoamotse Elias Tsoamotse was 95.  Khasa said he believed they were the last of the WW II veterans in Soweto.

A descendant of one of the men who fought at Square Hill, Adeel Karelse, who has written a book about his grandfather and the other men of the Cape Corps, spoke proudly about what the memorial meant to him.

“It was very nostalgic and, in a sense, painful because it brought back memories of my dad and all the stories about my grandfather who fought with valour at the Battle of Square Hill.  In fact, he was one of the Coloured soldiers decorated for valour. I was very surprised when I read his file and I went through his record of service and he was actually a very special person. He was one of the first people who volunteered for the machine gun section.”

Godfrey Giles, Virtual Branch Chairman of the South African Legion, said it was important to remember – and keep on remembering – those that paid the supreme sacrifice or who have returned from war – not just for a hundred years and not just the Battle of Square Hill.

More than 12 000 South African servicemen lost their lives in World War 1 – almost 4000 of them were either Black, Indian or Coloured.