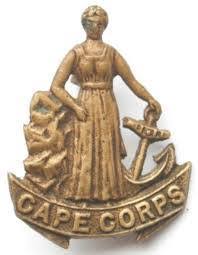 According to South Africa History Online in September 1915, the Union of South Africa Government offered to raise an infantry battalion of Cape Coloured men for service in the First World War and Second World War. The Cape Corps War Recruiting Committee was formed with its head office in Cape Town. Notices were placed in the press announcing that recruitment was to take place. On 25 October 1915, the first recruitment station opened at the City Hall in Cape Town. The response was so huge that the assistance of the police was required to control the crowd. Only 22 recruits were enlisted on the first day as the vast majority did not meet the stringent conditions for enlistment. They were then sent to Simons Town for training and were joined by fellow recruits from Stellenbosch, Worcester, Port Elizabeth, Kimberley and various mission stations including that of Saaron and Mamre.

The first battalion of soldiers that were formed from the Cape Corps.

A thousand soldiers went to battle against the Turkish. The battle took place during the evening on a hill (the hill was named SQUARE HILL after the battle had ended). This was on the road to Nablus in Palestine on the 18th September 1918. Hereafter the Cape Corps moved into Jerusalem and ended the ruled of The Ottoman Empire which lasted more than 600 years.

“The Battle of Square Hill was the climax of the involvement of the 1st Bn Cape Corps in the First World War (1914-1918). Although the unit was specifically formed for combatant service during the war, the Cape Corps can trace its ancestry back to the Pandour Corps raised during the Dutch occupation of the Cape and to the Cape Regiment and Cape Mounted Rifles formed in the eighteenth century after Britain had seized control of the Cape.

At the onset of the First World War, Cape Coloured auxiliary units were formed for service in the German South West African campaign. These units provided artillery and transport drivers, mechanics, officers’ batmen and various other non-combatants for the campaign. After the surrender of the German protectorate, the South African Government, under the leadership of Prime Minister Gen Louis Botha, took a decision to raise a unit of coloured troops for combat service in the German East Africa campaign. The decision was a bold one as government policy at the time stipulated that only white males could be used in a combatant capacity. It was made easier by the fact that all units raised in South Africa for service in East Africa would be Imperial service units paid for by the British Government.

The 1st Bn Cape Corps served in German East Africa from February 1916 to December 1917 and suffered 163 men killed in action. Eleven Distinguished Conduct Medals, seven Military Medals and two Belgian decorations for bravery were awarded to personnel of the Battalion during this period. Recruiting for the 1 st battalion had been so successful that a second battalion Cape Corps was formed in June 1917. This battalion served in East and Central Africa until July 1918. A special order issued after the battle commended the Cape Corps on their brave action at Square Hill

After their return to South Africa at the end of 1917, the 1st Bn Cape Corps received news that the British Army Council intended to reorganise the unit for service in another theatre of the war. It was sent to the Middle East where it formed part of the Egyptian Expeditionary Force under the command of Gen Sir Edmund Allenby. Allenby’s Force had been clearing the southern part of Palestine of Turkish Ottoman forces and, by the end of 1917, had taken Jerusalem and dug in along a strong defensive line north of the ancient city. The next step, planned for early 1918, was to crush the remaining Ottoman forces in Palestine and force Turkey out of the war, but the envisaged offensive was postponed to September 1918 after the German offensive along the Western Front in Europe in March 1918 brought a number of British and Imperial units allocated to the Middle East, back to Europe to reinforce the British armies that were floundering on that front.

In the meantime, the 1st Bn Cape Corps landed in Egypt in April 1918 and spent the following two months training. The Battalion was then placed under the command of British 160th Brigade which formed part of the 53rd Welsh Division. The other units of the Brigade were the 1st/17th Bn Royal Welsh Fusiliers, 1st/17th (Loyal) Indian Infantry and the 1st/7th Bn Punjabi Regiment. Although the men of the Cape Corps were well-nourished and clothed, early strains of the devastating Spanish influenza epidemic had begun to take its toll on the Battalion and, by September 1918, it could only maintain about 70% of its complement.

When the offensive eventually got underway on 18 September, the 53rd Division formed part of a force assigned to attack the Turkish positions north-east of Jerusalem through the Nablus Valley and the Jordan Valley. The 1st Bn Cape Corps was tasked to follow the 1st/17th Bn Punjabi Regiment and march along the watershed to take Dhib Hill, Chevron Hill, Crest Hill, End Hill and Square Hill with pickets being dropped along the route to protect the right flank of the advance. On arrival at Dhib and Square hills, the Battalion was to be responsible for protecting the right flank of the 160th Brigade against counter-attack from the east. The plan was that once the 1st/17th Sn Royal Welsh Fusiliers had signalled the capture of Hill 2362, Cape Corps detachments would be pushed forward to capture a high ground position known as Kh Jibeit.

The Battalion attacked Square Hill at 18:45 on 18 September with the men acquitting themselves admirably after an intense artillery bombardment. They achieved their objective early on 19 September with the loss of one dead and one wounded. During the attack, 180 Turkish soldiers and one gun were captured.

North of Square Hill, the retreating Turkish troops dug in strongly on Kh Jibeit and, instead of advancing safely along either flank to isolate the position and cut off the defending forces, the Battalion was ordered to capture it by 07:30 on 20 September. An earlier reconnaissance probe had suggested that, although the enemy strength in front of the Battalion was unknown, it was not considerable. The Battalion attack, set for 03:00, was to be preceded by a strong artillery bombardment of five minutes.

However, the attack did not go according to plan, beginning with the artillery bombardment, which started late and, once it got going, lacked accuracy, giving the Turks time to reinforce their defences. The order to attack was finally given at 05:00 which meant that the objective would only be reached in daylight. Almost immediately the men of the Cape Corps were met with terrific machine gun fire and the attacking force was broken up, suffering heavy casualties. By the time they were ordered back to Square Hill, all the officers had been lost and thus the retirement had to be effected by NCOs. This was done in an orderly and disciplined manner and by 23:00 on 20 September the Battalion was back at Square Hill. It comprised only ten officers and 350 men, having suffered 51 killed, 101 wounded and one person taken prisoner.”

The history of the Cape Corps is recorded in the archives of the Cape Argus. There were numerous articles published over the past 160 years.  Hereby we would like to commemorate this rich history.

These were hundreds of men who gathered at the city hall for the annual Cape Corps Ex’s Servicemen Legion commemoration service for the soldiers who lost their lives during the war. Military dignitaries attended this commemorative day. Today, the following symbols remain know to remember the Battle of Square Hill:

The families of the men in service and their memories

COLOURED families in the Cape and from other regions in South Africa have memories of their relatives for formed of the Cape Corps.  Some of these tokens are inherited memorabilia. There are those who have momentums from the battle in 1918 that demonstrated a front line resolve. At the time of the battle the value of these items and what the soldiers faced was not seen as value within their communities or there was a lack of understanding of how to deal post-traumatic stress. Now items of the battle are seen as historic treasures to families and assistance for these families are available.

SATURDAY May 11th, is an occasion which will be remembered by the coloured community of Cape town and their compatriots all over South Africa. This was the day which four companies of the South African Cape Corps Service Battalion came from their camp in Eerste River and marched through the Mother City with swords drawn, bayonets fixed, colours flying and drums beating. The mayor of Cape Town, Mr. D Bloomberg, salutes the Cape Corps as they march down Darling street during a ceremony honouring the rights of the cape Corps.

This day commemorated the signing of the charter giving the Cape Corps freedom in the City of Cape Town. This was executed before a distinguished audience in the City Hall and was signed into effect by the Mayor and Town Clerk (Mnr H.C.Heugh DFC ). They were also joined by other distinguished units who had similar charters and are kept on the Cities records.     They are:

The honour held by the Cape Corps Battalion is well deserved!

The Cape Corps is the Oldest Regiment in South Africa and has a proud history. It gained immortal fame in Palestine in 1918/19 at the battle of K.H.Jibeit Square Hil and Dhip Hill.

In the last war, members of the Cape Corps served with distinction in East Africa, Abyssinia, in the western Desert in Italy.

The Cape Corps name came into existence in 1797.  Its invaluable service was interrupted (halted) after World War one. Despite the many interruptions they Cape Corps was reinstated and eventually laid their flags down and ceased to exist.

Poppy Day, also known as Remembrance Day and Armistice Day, is held each year on 11 November. It commemorates the day that the armistice was signed between Germany and the Allied Forces of World War 1, which officially marked the end of the war. The agreement was signed at 11h00 on 11th day of 11th month in France.

Each Armistice Day in South Africa (as in other countries which formed part of the WW1 Allies) the 20 million who lost their lives in the War are remembered by means of a 2 minutes silence at specially held ceremonies, and the wearing of red poppies to signify the poppies that grew in between the trench lines and no man’s land on the Western Front.